‘The Dark Kitchen’ brings a global concept to the neighbourhood

‘The Dark Kitchen’ opens up in the neighbourhood

“Ghost kitchens” or the “dark kitchen’ is a concept sweeping through big cities worldwide, and now our hood has its own dedicated one, named none other than “The Dark Kitchen”.

Larry Hodes, owner of Arbour Café and voodoo Lily (in Birdhaven) as well as Calexico at 44 Stanley in Milpark, has launched what is known as a virtual kitchen, a cloud kitchen or a delivery-only restaurant. It will be accessible only online or by phone, there is no actual restaurant which means no place to sit and no access from the street. At the moment one can order pizza, but there are plans to have three food categories as part of the offering over the next couple of months.

It will be accessible to those within a 7km radius of Wanderers and pizzas can be ordered through Uber Eats, Mr D or by calling The Dark Kitchen directly (on 010 9003703) until 21h00 at night. To find out more on www.thedarkkitchen.co.za

But wait, there’s more. You can order champagne (at just over cost); beers, wine and Paul’s Homemade Ice cream.

And here’s a novel feature. It’s the only pizza in the world to have nine slices. So when you order your pizza, you get an extra piece in the cutest little cardboard triangular box, as an extra piece – that perfect piece for breakfast, or to take to work as you rush off in the morning.  Pizza bases include normal, gluten-free or cauliflower or even vegan cheese. 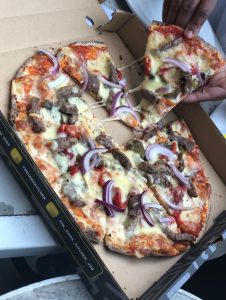 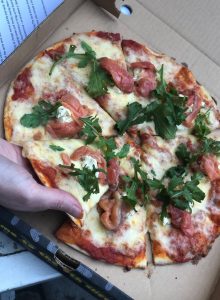 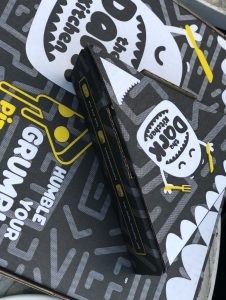 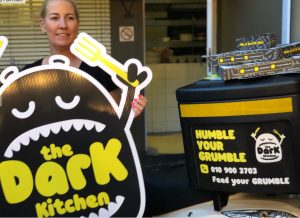 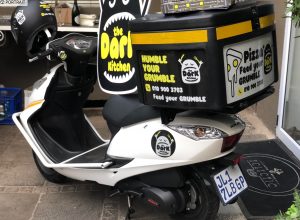